A Dream for Peace 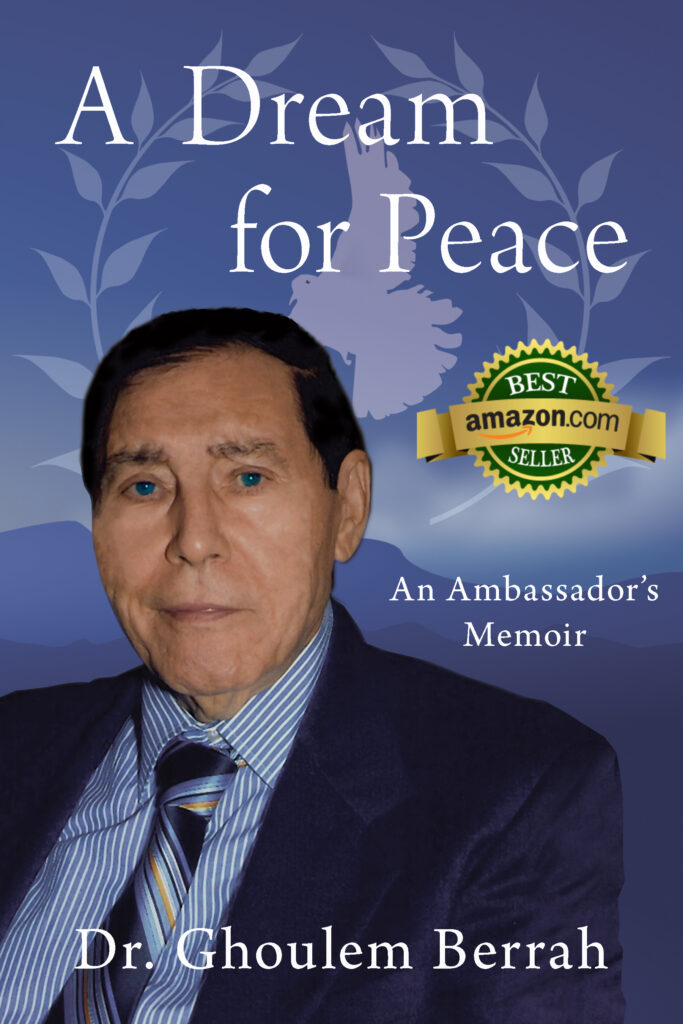 A Dream for Peace is the most surprising Memoir by an Ambassador published  by  Dr. Ghoulem Berrah Foundation in March 2019.

This very rich and captivating life story is paved with many bumps, twists, and turns, multiple lives in one life.

Freedom Fighter for the Independence of Algeria, Man of Science and Lecturer at the Yale School of Medicine, Ambassador, Dr. Ghoulem Berrah (1938-2011) was a tireless proponent of world peace.

“ A detailed book about an extraordinary man and his belief that ‘only dialogue can save humanity from the perils of war.’” — KIRKUS REVIEWS

“A Dream of Peace is a life-changing book. It contains a wealth of wisdom and encouragement for all people of good conscience to promote a world full of peace and love and free of hate and bigotry.” — Dr. Abdul Hamid Samra, Imam & Religious Director Islamic Center of Greater Miami.

I was born into a humble but strong and very proud family. A mausoleum of my ancestors is set high in the Aurès Mountains in the town of Chechar, above the village of Ariss, where the Benboulaid brothers fired the first shots of the Algerian Revolution.

Hardship And and Prison

I spent all my time praying and reading the Bible in Spanish—a language I barely understood—but I kept reading to improve my comprehension. I used a spoon to mark the wall, whenever I imagined that a full day had passed. I prayed that God would someday set me free so that at the very least, I could live one single day in an independent Algeria.

As a result of my activities, I was invited to the People’s Republic of China to represent the FLN and the youth of the Third World. We did not have an FLN branch in China for lack of diplomatic relations with the Chinese government, and unlike the Eastern European countries, we had no students in the country. I was the de facto ambassador.

I had the opportunity to meet face-to-face with Mao Zedong.

My American Experience—Becoming a Scientist

I was the first scientist to ever give a hypothesis on what was later identified by Professor Howard Temin as the “Reverse Transcriptase Enzyme”—which is a factor in enabling specific RNA viruses to induce certain forms of cancer. As a result of my initial discovery in 1961, and my hypothesis at the Houston Conference in 1962, Temin managed to isolate the enzyme’s immunologic structures later in the 1970s while conducting further research at the University of Wisconsin in Madison.

The Call of Africa

On a bright and beautiful morning in 1965, I responded to the call of Côte d’Ivoire—the Call of Africa.

The words of the president had lingered in my thoughts ever since our fateful meeting at the Waldorf Astoria hotel: “More so than the United States, Africa is in much need of you. We are in the process of development. Come and help us. You will be free to leave and go wherever you want to go, when you tire. We have many things to do together.” Those were the words that helped convince me that an equal level of development was the only path to peace and understanding among all people. I purchased my plane ticket for the maiden journey to the city of Abidjan—on a mission to serve Africa.

The portrait of our affectionate relationship expressed the depths of our unfettered love for peace and dialogue among all humankind. As I reflect through the following recollections from our shared experience, I am reminded of the purity of my bond with President Houphouët-Boigny, which was truly filled with trust and intimacy.

Throughout the many excruciating challenges we faced trying to get to the altar, our love for each other was only strengthened by our faith in the Almighty. Ultimately, we knew that if it were meant to be, our union would culminate in a happy marriage.

President Boumédiène received a copy of the Cuban leader’s speech hours before Castro was to address the summit. When he noticed that the content was full of personal insults directed at President Houphouët, he decided to intervene and prevent a major diplomatic incident. An irate President Boumédiène made me aware of the hot-button issue at the very last minute. “Mr. President, let Castro go ahead with his speech,” I said, after pondering the matter. “We will cut off his microphone feed to everyone’s headphone as soon as he gets to the insults and pretend there was a technical problem. He will continue to speak, but no one will hear that part of his speech. The technical glitch will be ‘fixed’ as soon as he moves on to the next topic.” The president liked my idea. Much to everyone’s relief, the plan was perfectly executed at the time of Castro’s speech, and none of the attendees, including President Houphouët, picked up on the anomaly.

Israel and Palestine—Our Plea for Peace

We had successfully arranged the first-ever dialogue between the ICIPP and the PLO. There had been no emotional outbursts, only expressions of deep- rooted feelings and raw sentiments, which could barely be contained—something powerful, almost unreal, had illuminated from the participants.

During the Muslim call to prayer, we could also hear the Christian procession praying loudly as they made their way past the mosque en route to the Holy Sepulchre— while at the same time, the Jews prayed at the Wailing Wall. Together, all the prayers of the various faiths, emanating in unison, rose toward the sky. A sign of our common faith in one unique God.

Memos from the Cold War

“He is taking back the port of Berbera from the Russians and charging you with the responsibility of delivering it to the Americans,” I said to the president enthusiastically. He paused and smiled back at me. “Hmmm, you don’t seem to know the Westerners very well,” he remarked. “Between us Africans, we never fail to honor our verbal commitments. But for Westerners, words are without merit. Everything must be in writing.” – President Houphouët-Boigny

After hosting Prime Minister Vorster in Yamoussoukro on September 21, 1974, he informed me that the meeting had been very constructive. He went on to say that he first observed a mulatto among the South African delegation and made light of the situation. “What is the origin of the many mulattos in your country?” he nudged the unsuspecting prime minister.